We stock a range of new and antique violins, violas and cellos, naturally weighted towards instruments made here in the workshop. The list of instruments given is not exhaustive, so if there is a particular instrument or price bracket you are looking for please don’t hesitate to call. A range of student instruments are available on order, and even if we don’t have what you’re looking for in stock we may be able either to source it, or put you in touch with someone in the violin trade that can.

Professionally set up with solid ebony fittings and a hand cut bridge fitted to the instrument.

A good entry-level instrument professionally set up in the workshop here. 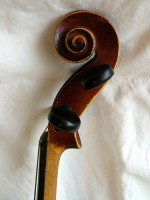 An attractively flamed two piece back. The original veneered fingerboard has been replaced with one of solid ebony.

This instrument has a one piece back, and has been thoroughly reworked, the top plate having been rethicknessed and tuned with an improved bass bar.

Labelled as an Andrea Guarneri, in truth closer to a Stradivari model. A one piece back of flamed bird’s-eye maple bearing the distinctive ‘crackled’ varnish one would expect of these instruments.

A better quality French trade instrument, probably the Stradivari IV model listed in the JTL catalogue of 1912. A repair to a bass bar crack has been carried out in the workshop, and the whole instrument has been thoroughly reworked to bring it to optimum playing condition.

An unlabelled instrument, but may be the work of local maker Hamilton-Doyles, who was also a monument sculptor. It appears to be an English-made instrument, of good workmanship and materials, oil varnished with a small amount of natural wear and generally in very good condition.

This instrument is modelled after the Guarneri ‘del Gesu’ ‘Soil’ of 1733. It has a stop length of 193mm making it ideally suited to players with smaller hands, and was selected by the Allegri quartet for its tone quality at their Newark Violin School concert.

A small instrument with a surprisingly full and rounded tone. Labelled as made by The British Guild of Violin Makers, this instrument is stamped internally with the initials B.B., possibly referring to a Benjamin Banks model, and also marked faintly A.J. so is most likely the work of the Guild’s founder A.J. Roberts. The original post and bridge, marked with the group’s emblem is also available. 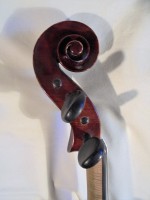 The label dates it to 1801, but this violin is more likely to be the work of the grandson of the same name. The varnish appears to be of a typical Mittenwald dark hue, but is a remarkable transparent dark red when seen up close. A new bass bar has been fitted and the tone is extremely powerful and viola-like on the lower strings.

Based on the Stradivari ‘Messiah’ model, this instrument has a soft, sweet tone.

Based on the Stradivari ‘Messiah’ model, and the instrument judged by J. and A. Beare to be the best by a British maker in that years test at the Newark School. This instrument has a powerful and rich tone.

An instrument based on the Guarneri ‘del Gesu’ ‘Cannone’ played by Paganini, retaining the shapes and large dimensions of that instrument, but ironing out some of the eccentricities of late ‘del Gesu’ workmanship.

A violin based on the mid-period ‘del Gesu’ instrument known as the ‘Soil,’ its slightly smaller dimensions make it an easy instrument to get around. This instrument has been given an antique finish and boxwood fittings.

A violin based on the Guarneri ‘Il Cannone’ model, with an antiqued finish and boxwood fittings.